The Toy Assassins! (Table of Contents) 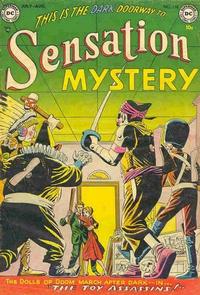 Buzzy Says: "Get a Box-Seat to Nature's Wonders!" (Table of Contents: 1)

The Toy Assassins! (Table of Contents: 2)

Genre
detective-mystery; fantasy-supernatural
Synopsis
A priceless necklace is stolen from a department store. Peril claims an army of toy soldiers to be responsible. Thus he tricks the thief to come forward.
Reprints

Clocks of Doom! (Table of Contents: 5)

The Phantom Enemy (Table of Contents: 7)

Genre
drama
Synopsis
Schizophrenic art painter Gene Dyer creates replicas of his paintings as Gardner Dell. He leaves poisoned medicine for the copycat, but kills only himself.
Reprints

The Census Taker! (Table of Contents: 9)

The Clairvoyant Commander (Table of Contents: 11)

Genre
non-fiction
Synopsis
The predictions of the British military commander-in-chief, Lord Roberts, in 1908.

Genre
drama
Synopsis
Richard Prentiss is confronted with unusual occurrences. Behind those is his brother who wants to drive Prentiss insane.

Superman Is on Television! (Table of Contents: 16) (Expand) /