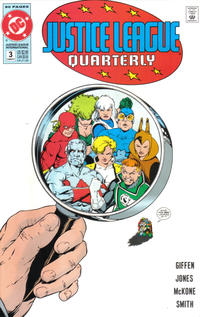 The Justifiers are inspired by Marvel's Avengers. They first appeared in Justice League of America #87. They are Wandjina (Thor); Silver Sorceress (Scarlet Witch); Bluejay (Yellowjacket); Captain Speed (Quicksilver); other members first shown in this issue include Tin Man (Iron Man) and three other unnamed heroes: an archer (Hawkeye), a giant (Giant-Man/Goliath); and a woman in green with wings (possibly the Wasp). The Extremists are also inspired by some of Marvel's villains: Lord Havok (Dr. Doom); Dr. Diehard (Magneto); Gorgon (Dr. Octopus); Tracer (Sabretooth); Dreamslayer (Dormammu). Mitch Wacky is inspired by Walt Disney. The unnamed hero mentioned above looks like Wolverine with Mickey Mouse ears.