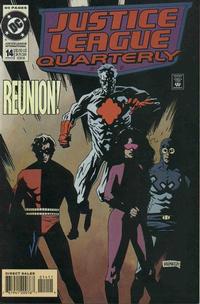 Captain Atom, Blue Beetle, Nightshade, Judomaster, Thunderbolt and Sarge Steel were all characters created by Charlton Publications and purchased by DC. The only other major Charlton character owned by DC not shown here is the Question.

Scent of Fear (Table of Contents: 2)

Genre
superhero
Characters
Crimson Fox; Sir Edmund Grasse; Miss Wardlowe (Sir Edmund's associate)
Synopsis
Crimson Fox is being hunted by Sir Edmund Grasse, whom she meets at an antique perfume container exhibition. They are initially smitten with each other and she goes with him to his home. Once there, he paralyzes her with a drugged lip gloss. He wants to analyze her natural control over pheromones, and needs her alive but incapacitated. She overcomes his drug and barely escapes, only to end up in a kennel of wolves Grasse keeps on his property. Spraying Grasse with a pheromone she stole from his lab, the wolves attack him. Using her power, she calls the wolves off as he lies unconscious.

It is unclear from this story whether this is Vivian or Constance D'Aramis. They are twin sisters that both use the Crimson Fox identity.

Genre
superhero
Characters
Jack O'Lantern; Annie McDonnell; Annie's father and mother; unnamed Protestants and Catholics (Annie's neighbors); passengers and crew of two airplanes
Synopsis
Jack O'Lantern protects a 14 year girl who is pregnant. Her parents are taking her to London for an abortion, but some of Annie's neighbors feel differently about the issue. They go so far to place a bomb on her plane to ensure she doesn't get to London. Jack saves everyone only to learn who the father of the baby is, then serves him a righteous justice.

A pinup of the Tasmanian Devil.

Ascent into the Abyss (Table of Contents: 5)

Genre
detective-mystery; superhero
Characters
Praxis; Deena Walker; Professor Morris Martek; Ghast (a mystical demon); Dexter DeFarge (a serial killer); Gianni Fusilli (a pilot); Chief Drumm
Synopsis
When no murder attempt is made on a professor's life, Praxis and Deena think they are protecting the wrong target. They realize that all the prior victims have dual aspects, and go to save Gianni Fusilli, DeFarge's next victim.

This is a continued story to be concluded in the next issue.