The Assassin of Paris! (Table of Contents) 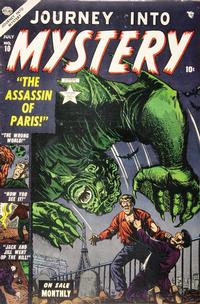 [The Only Man in the World, Part 2] The Wrong World (Table of Contents: 1)

Job Number
C-522
Genre
horror-suspense
Characters
Wilbur Thompson; Zadixx
Synopsis
The professor from the first story in the previous issue rebuilds the cyclotron that he destroyed in order to activate it and restore time to the moment just before humanity was wiped out.
Reprints

Jack and Jill Went up the Hill! (Table of Contents: 2)

Job Number
C-727
Genre
horror-suspense
Synopsis
A woman named Jill murders her stepbrother Jack while mountain climbing, and the tether between them drags her down as well.
Reprints

Job Number
C-816
Genre
horror-suspense
Synopsis
When his wife threatens to leave him for the manager, the magician really does saw his wife in half.
Reprints

The Assassin of Paris (Table of Contents: 5)

Vacation for Vincent (Table of Contents: 6)