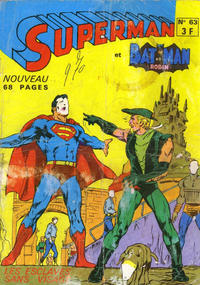 Genre
super-héros (superhero)
Characters
Superboy [Clark Kent]; Jules Verne
Synopsis
A time capsule found underneath Metropolis reveals Jules Verne, who experimented with time in 1875. He wants to see the wonders of the world, so Superboy, with his top-secret clearance, shows off America's weaponry. Until Superboy catches a few anachronisms and exposes a spy - out to test Superboy's ability to keep a secret!
Reprints

Genre
super-héros (superhero)
Characters
Legion of Super-Heroes [Cosmic Boy; Saturn Girl; Lightning Lad; Sun Boy; Superboy; Chameleon Boy (statue); Bouncing Boy (statue); Shrinking Violet (statue); Invisible Kid [Lyle Norg] (statue)]; Lex Luthor; Urthlo; Mon-El
Synopsis
At a regular meeting of the Legion of Super-Heroes, the Legionnaires lose control of their powers. Urthlo arrives and announces that he now controls the Legionnaires' powers and there is nothing they can do about it. But Saturn Girl comes up with a serum to temporarily cure Mon-El and immunize him against lead, and Superboy releases him from the Phantom Zone to knock out Urthlo, who turns out to be an automaton created by Lex Luthor sent into the future to destroy the Legion.
Reprints

Mon-El becomes a member of the Legion in this story.