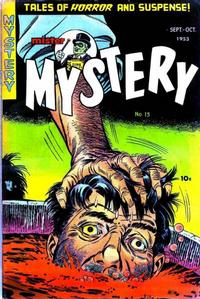 The Gossips (Table of Contents: 1)

Genre
horror-suspense
Synopsis
Three fiendish old ladies spread hateful rumors about other people, driving them into suicide. The dead, however, come back from the grave and take cruel revenge.
Reprints

Infamous final panel depicting the severed and mutiladed heads of the ladies, put on spikes.

Genre
horror-suspense
Synopsis
Attractive vampire lady feeds on a group of hobos. The last one manages to impale the creature on a tree branch.
Reprints

When The Deep Purple Falls (Table of Contents: 3)

Genre
horror-suspense
Synopsis
A murderous vampire depends on the assistance of trained hawks to wake him at night. With the summer comes the arrival of martins and swallows. These birds drive the hawks away. The vampire can't rise again and will starve in his hiding place.

The Clock Maker (Table of Contents: 4)

Genre
horror-suspense
Synopsis
With the help of a witch woman watchmaker Ben Loftus creates lifelike timepieces. When his wife Lois betrays him and plans to kill him, Loftus bewitches them to murder each other.
Reprints

Previous indexer suggested A. C. Hollingsworth ? for pencils and inks.

Genre
crime
Synopsis
A man wants to get rid of his unfaithful wife and seeks the services of a contract killer named "R. Sennic". The job is accepted, but the man has to die himself.

The Picnic! (Table of Contents: 6)

Genre
horror-suspense
Synopsis
Hugo Brandt loves to engorge himself on food. He meets a lovely woman who shows interest in him. On a picnic he discovers why - she's a vampire looking for fat prey.
Reprints