Some data for this issue from Jerry Bails' index cards & Howard Keltner's index. 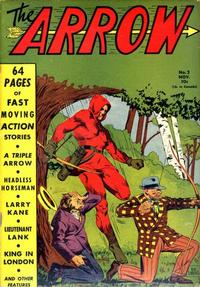 First Line of Dialogue or Text
Help police! The bank has been robbed!
Genre
superhero
Characters
The Arrow [Ralph Payne]; Richard van Vadeen; Police Captain; Harry (villain, bank robber); "Schultz" Forbes (villain); Forbe's gang (villains); The Boss (villain, kidnapper); The Boss's gang [Limey (death); Slick; Bull (death)] (villains, kidnappers)
Synopsis
A crime boss has a great idea on how to make some easy, sure loot: follow thieves to their hideout, fire arrows into the place (making them think the Arrow is on to them), and when the crooks clear out, they enter and take the lucre. But this idea is only a diversion for a bigger and better crime: kidnapping.
Keywords
19 Club

First Line of Dialogue or Text
Being instrumental in the capture of the murderer...
Genre
superhero
Characters
The Arrow [Ralph Payne]; Harry Benson (reporter); Benson's newspaper Editor; Charlie (newspaper press man); Jane (reporter); Chief of Police; Marcus (villain, killer); Marcus' mob [Rickie; rest unnamed) (villains)
Synopsis
On the eve of the murder trial of a gangster named Marcus, reporter Benson gets a warning from Marcus' gang not to testify against their boss or else.
Reprints
Keywords
The Herald (newspaper)

The last panel of the story shows the Arrow shooting an arrow, but the rest of panel is blank. No doubt it said something in the original version before the story was reprinted here.

The last panel of the story shows the Arrow shooting an arrow, but the rest of panel is blank. No doubt it said something in the original version before the story was reprinted here, and one can see traces of the lettering that was once there.

Genre
western-frontier
Characters
The Headless Horseman [Betty (Paige) Warren]; Black Beauty (Horseman's horse); Betty's mother; Jim Parks (death); Sheriff Jim Dandee; Alec Trush (villain, owner of the Bar-X Ranch); Trush's gang [Hank; others un-named] (villains)
Synopsis
It seems the Headless Horseman has been up to no good, killing people, burning down a town and more, but Betty will believe none of it, even after the Horseman apparently robs the stagecoach she is riding in. Since she is the real Horseman, she sets out to find the true culprits.
Reprints
Keywords
Bar-X (a ranch); Gringo Gulch (Idaho); Last Chance Saloon; Lazy J (a ranch); Mesa

Speedway of Death! (Table of Contents: 6)

First Line of Dialogue or Text
Lieutenant Lank -- the Robin Hood of wartime...
Genre
adventure; war
Characters
Lieutenant Lank [aka the Robin Hood of Wartime]; Bavanian Consulate; enemy soldiers (villains, some die)
Synopsis
Lank is called in by the Bavanian consul, fearing that an enemy attack is due. He is right, so the Lieutenant heads out to investigate. Discovering enemy bombers at work pummeling a small town, Lank mans an airplane to face the foe.
Reprints
Keywords
Attainia; Castle Dor; Tara (a town)

Previous appearance of this feature in Amazing Mystery Funnies #24.

The story ends abruptly with a blank small panel in the last story panel (because this is a reprinted story), no doubt once giving information about the continuance of the story.

Genre
fantasy-supernatural
Characters
Tippy Taylor; Satan (villain); Carlos (villain, Satan's assistant)
Synopsis
After escaping from the Underground World by reducing himself to miniature size, Terry, in order to regain his true size, must remain in the House of Satan for one whole night. But Satan forces him to drink a potion that changes him physically, but not mentally, and Tippy succeeds in besting Satan and returns to normal size.
Keywords
House of Satan