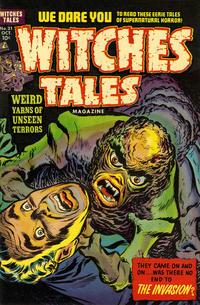 Synopsis
Text descriptions and thumb-nails from each of the 4 stories in this issue.

The Invasion (Table of Contents: 2)

Genre
horror-suspense
Characters
Bill; Bill's wife; John Bronheit
Synopsis
Bill and his wife stay home due to a storm. Their radio is broken and their television set can only get one channel because of the weather. They see a news broadcast depicting an invasion from outer space. Flying saucers land at Coney Island and wipe out the defenders. A Martian spokesman says all inhabitants of Earth will be eliminated. Bill shoots his wife and commits suicide. But the broadcast was just "an original tele-screen drama entitled The Invasion From Mars."
Reprints

First Line of Dialogue or Text
Tommy Trot ... a man we deplore!
Reprints

Genre
horror-suspense
Characters
Ron; Melissa; the town dandy
Synopsis
Ron and his wife Melissa go on vacation in a trailer. They camp near a small town and Ron goes to purchase supplies. When he returns, Melissa says she was raped. They drive around the town until Melissa spots her assailant, and Ron kills the man with a hammer. However, immediately afterwards Melissa sees someone else and says "There he is!" Ron realises she has gone insane and he just killed an innocent man.
Reprints

Based on the short story "Revenge" by Samuel Blas. This story was first published in Colliers (January 11, 1947). The story was also used as the basis for "Revenge," an episode of "Alfred Hitchcock Presents" shown on 2 October 1955, and also in the new Hitchcock television series in 1985. It also served (uncredited) as inspiration for the TV-movie "Revenge for a Rape" (1976).

The Chase (Table of Contents: 8)

Genre
horror-suspense
Characters
Ellen Temple; John
Synopsis
Ellen and her boyfriend John visit an Asian tea shop, where an old woman warns Ellen to beware of the "Dark Man" and the "Teeth of the Dragon," and to remember "you have no wings!" Later, a man dressed in black tries to speak to her, but Ellen flees. She falls off a roof, hits a dragon statue and dies. The man in black says he was just trying to inform her that she'd inherited a million dollars from a distant relative.
Reprints

First Line of Dialogue or Text
This is the man all tattered and torn
Genre
humor; horror-suspense
Reprints

Genre
horror-suspense
Characters
Jim Trent; Nicholas; Pearson; Miss Adams; Madeline Trent; Teddie; Carl Andro
Synopsis
Business executive Jim and his wife Madeline leave for a vacation at their lodge, but Jim's ex-partner Andro--who had been sent to prison as a scapegoat--appears and blackmails them. Jim kills Andro and drags the corpse into their vacation home, only to discover his co-workers and children are there to give him a surprise birthday party.
Reprints