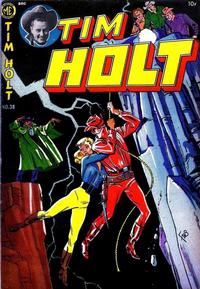 Photo of Tim's new horse. Printed sideways on the inside front cover.

Return of the Black Phantom! (Table of Contents: 2)

Genre
western-frontier
Characters
Redmask [Tim Holt]; Black Phantom; Sheriff Gage; Bull
Synopsis
The Black Phantom decides to go straight. However, when she attempts to turn in her old gang they turn the tables and use her to lure Redmask to his death.
Reprints

The editor asks readers to write in if they want to see "the Black Phantom as a girl-assistant to Tim in some of his Western adventures?"

The Phantom Guns of Feather Gap! (Table of Contents: 3)

Crimes of the Cape! (Table of Contents: 4)