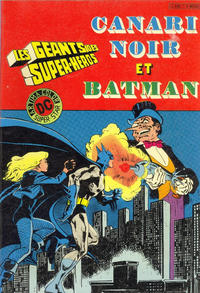 Genre
super-héros (superhero)
Characters
Legion of Super-Heroes [Element Lad; Duo Damsel; Bouncing Boy; Colossal Boy]; Kantuu; Tage; Rin; Guardians of The Universe (cameo); Djinn (cameo)
Synopsis
The Legion must find a way to re-bottle the genie Kantuu, whose bottle has been destroyed and who intends to recruit other Djinn as an army to conquer planets.
Reprints

The Djinn were a warrior race that attacked Oa. When defeated by the Guardians, they were placed in bottles of green energy and their sentence involved serving whomever released them. It is presumed that the green energy is what forces them to serve and allows them to grant wishes.