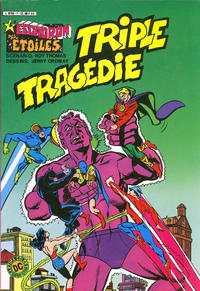 Featuring origin recaps of Wildcat, the Guardian and the Atom as they are all shown to have the same trainer during their early months. The evil force of the story is the magic expelled from the Earth-One universe by the Guardians.

Volez plus haut ! (Table of Contents: 2)