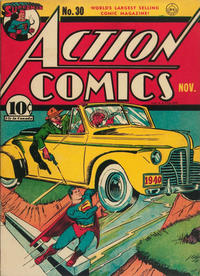 [The Midsummer Snowstorm] (Table of Contents: 2)

Genre
superhero
Characters
Superman [Clark Kent]; George Taylor (named); Lois Lane; Laura Vogel (introduction); Zolar (villain, introduction); Mr. Calvert (villain); Carlton Vogel (introduction)
Synopsis
In midsummer, the city of Metropolis is caught in the midst of a bitter snowstorm. As Clark investigates, a message from Laura Vogel comes over the radio, telling Superman to meet her in Park Ferry since she can explain the snowstorm. Before Superman arrives, some foreigners use a glowing globe to disintegrate a girl and a policeman. Superman gets there in time to save Lois from the same fate, but the Arabs get away.
Reprints

First Line of Dialogue or Text
The Hill-and-Dalers, Midtown College's cross-country team...
Genre
adventure
Characters
Pep Morgan; Norman; Molly; Coach
Synopsis
Pep is the only hope for victory for the Hill-and-Dalers, Midtown College's cross-country team, but Norman of State beats him. The Coach convinces Pep to beat the jinx that Norman holds over him.

The Royal Road to Romance by Richard Halliburton (Table of Contents: 11)

First Line of Dialogue or Text
Gunner, Whistler Will and Fog Fortune - three adventurous airbirds probing the secrets of a world...
Genre
adventure
Characters
Three Aces [Fog Fortune; Gunner Bill; Whistler Will]
Synopsis
Will reads about the loss of airman Bill Decortland over the South American jungles. The Aces go to the Amazon to track him down.

Genre
adventure
Characters
Clip Carson; Pierre Renoire (villain); Rudolf (villain); Pudge (villain); Allen Lane (villain); Marie Temperal (villain); Pat (villain)
Synopsis
Clip Carson is in Hollywood, supervising the production of adventure pictures, and he's asked to do an interview for Pierre Renoire of Le Clarion d'Algiers. Clip reminds him of someone, but he's needed on the set. Renoire disguises his assistant, Rudolf, to look like him and sends him to the set, where Mare Temperal is found dead, apparently electrocuted. Clip investigates when he visits Renoire but is denied entry into his home.

Genre
adventure
Characters
Zatara; The Master (villain); The Tigress (villain); Detective Regan (villain); Carr (villain)
Synopsis
Regan of police headquarters asks Zatara for help in a case where wealthy men are killed by the "mottled death." Zatara deduces that it was from the bite of an insect, a South American jungle jumbo. Shortly, he finds out that the Tigress is involved. He follows her and a magician named only The Master to South America.