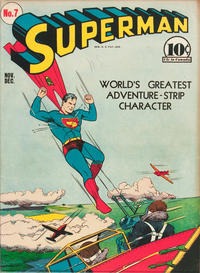 [The Three Kingpins of Crime] (Table of Contents: 3)

First Line of Dialogue or Text
Greetings again, members! This time I want to talk to you about hitting the line hard...
Genre
superhero
Characters
Superman [Clark Kent]
Synopsis
Superman discusses the idea of "Hitting the Line Hard!" A code message in the Code Mercury No. 1 is given, and a coupon is provided for readers wanting to join the Supermen of America.
Reprints

[The Loudest Noise on Earth!] (Table of Contents: 5)

Facts presented include the musk odor of deer; chewing gum use among stone-age people; the loudest sound on Earth when the volcano, Krakatoa, exploded; and the fact that Chalchas laughed himself to death.

Genre
adventure
Characters
Rinaldo; Domenick (death); Pietro (villain, death)
Synopsis
Rinaldo, a Gypsy Prince, had heard stories that his adoptive parent had stashed a fortune in gold away in the gypsy caravan, but he had always denied it. However, one night Rinaldo found his adoptive father dead, with a note in his hand stating that the young man should safely store away a fortune in gems that were his, unknowing that the gypsy chief's son was the murderer.
Reprints

Inker credit by Craig Delich & Jerry Bails. Page 2 of the story has several advertisements, including one for Baby Ruth and Butterfinger candy bars.

Superman Plus (Table of Contents: 9) (Expand) /

First Line of Dialogue or Text
Take that, you mutt
Genre
anthropomorphic-funny animals
Characters
Shorty (a dog)
Synopsis
Shorty gets knocked out by another dog and begins dreaming, first of birds flying about, next of a package of dog biscuits and lastly of a girl dog (before he wakes up). He looks up the other dog and asks him to hit him again!
Reprints

The Black Gang (Table of Contents: 17)