This issue is a variant of Lockjaw and the Pet Avengers (Marvel, 2009 series) #1. There exist further variants. 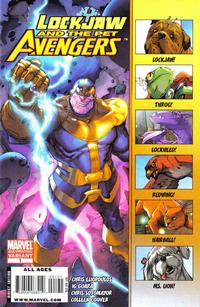 The Infinity Gems (Table of Contents: 1)

Genre
superhero
Characters
Pet Avengers--Lockjaw; Throg [1st; Origin; Simon Walterson]; Lockheed; Redwing; Hairball [Niels] (Speedball's Cat); Ms. Lion; GUESTS: Mr. Fantastic; Invisible Woman; Black Bolt; Medusa; Gorgon; Karnak; Crystal; CAMEO FLASHBACK: Thanos; Thor (as a Frog); Puddlegulp
Synopsis
Mr. Fantastic visits the Inhumans and tells them to keep an eye out for an Infinity Gem. Lockjaw digs up the mind gem and teleports to Earth when he is reprimanded by Medusa. There he meets Throg, a human turned into a frog who gained the powers of Thor. Throg and Lockheed decide to try and collect all of the Infinity Gems and gather other heroic animals to join their quest. Lockheed the dragon, Falcon's falcon Redwing, Speedball's cat Hairball and Aunt May's dog Ms. Lion join the team. The pets travel to the Savage Land where they find another gem but are attacked by a dinosaur.
Reprints