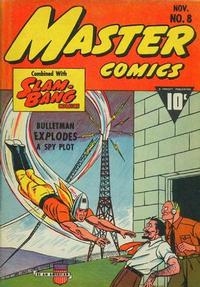 [The Alliance of Boss Garlow] (Table of Contents: 1)

[Grimmac and the Gold Map] (Table of Contents: 3)

Genre
jungle
Characters
Lee Granger; Grimmac (villain, dies)
Synopsis
When Granger stumbles upon gold in a river, Grimmac kidnaps the pygmy chief and demands Granger surrender his land so the renegade can take the deposits.

[The Invasion of the Scanlos] (Table of Contents: 4)

[Battle in Belravia] (Table of Contents: 6)

[The Trial of Cantrell] (Table of Contents: 9)

Battefield is credited with pencils and inks in the Devil's Dagger story in this issue, and that art is similar to this story. The faces of the villains are exact matches, long chin, small eyes and long noses. Also notice the face in sideview in the Battefield scan on Jerry Bails' Who's Who from Target comics with pencils by Battefield, and from the same period.