The Hobgoblin Revealed! (Table of Contents) 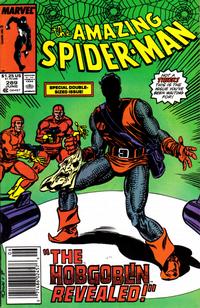 The Hobgoblin Revealed! (Table of Contents: 1)

Story continues from Spider-Man vs. Wolverine (Marvel, 1987 series) #1; O.K. so this issue reveals that that Hobgoblin was Ned Leeds--sort of; After four years of hints, clues and red herrings, somebody had to be under the yellow Goblin mask; Original Hobgoblin creator Roger Stern left the comic without telling anyone his ideas on the true identity of the villain; Tom DeFalco who wrote many of the issues leading up to this revelation had an alleged falling out with editor Jim Owsley and quit the book without providing the identity of who he intended to be Hobgoblin; According to Peter David, he was told to write this unmasking story and Owsley intended for the secret identity of the Hobgoblin to be the Foreigner; This made no sense to David and they tried to hash out who actually COULD be the villain; Ned Leeds became the only viable suspect (and was a fan favorite for the role) but Owsley had already written the Spider-Man Vs. Wolverine one-shot in which Leeds was killed; It was up to Peter David to paint Ned as the culprit posthumously; Fast forward ten years to 1997 which saw original Hobgoblin scribe Roger Stern returning to the character in the Hobgoblin Lives limited series; In this story, he does a little creative rewriting of history (we fan boys call it retroactive continuity) and he reveals that Ned Leeds was simply a brainwashed dupe of the REAL Hobgoblin, narcissistic fashion designer Roderick Kingsley; Ironically, Kingsley is the only person according to the original stories who could NOT have been the Hobgoblin as he was seen on two occasions to be working with the villain and talking to him without his mask; Stern introduced a secret twin brother, Daniel, in Hobgoblin Lives who impersonated Roderick at key moments and made the Kingsly-as-Hobgoblin theory at least mildly plausible; This is Marvel's official version of the Hobgoblin controversy and the convoluted appearance list issue by issue can be seen under the Hobgoblin character profile on Marvel's official site here: http://www.marvunapp.com/Appendix5/hobgoblinkingsley.htm; Peter David discusses the story for this issue and the Leeds/Hobgoblin decision here: http://www.peterdavid.net/archives/002234.html.