This issue is a variant of Conan the Barbarian (Marvel, 1970 series) #16 [Regular Edition].

Night of the Frost-Giants! (Table of Contents) 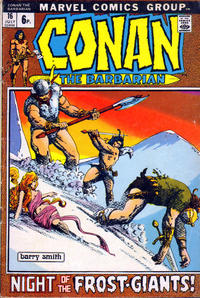 The Sword and the Sorcerers! (Table of Contents: 2)

Genre
sword and sorcery
Characters
Trull the Wizard; Morro; Starr the Slayer
Synopsis
Setting: Zardath. In this early prototype of Conan, Starr the Slayer kills a Wizard, then travels to the present and kills his writer.
Reprints

Smith recolored story, as noted in the letters page.

Special Surprise Note; letters from Tom Steinke and Jeffrey May.

The Hyborian Age of Conan (Table of Contents: 5)