Millionth issue supposedly from 853rd century; cover gives a fake date of "Nov 85,271". It is part of the DC One Million crossover promotion on the cover, shared with other November 1998 titles. Published in between Superman #139 and 140.

One Million (Table of Contents) 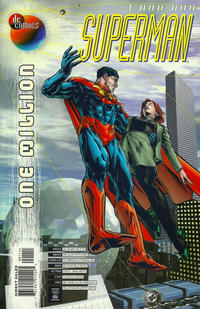 First Line of Dialogue or Text
This is the special collector's print editon of Superman #1,000,000...
Genre
superhero
Reprints

Gives background on Justice Legion A and the android Hourman, with a recap of the story so far. Digital frontispiece by Pat Garrahy.

Down to Earth (Table of Contents: 2)

Genre
superhero
Characters
Superman [Kal Kent]; Arsenal [Roy Harper]; Lois Lane; Lex Luthor; Lena Luthor (on monitor)
Synopsis
Earth is infected with the Hourman virus. The Superman of the future is losing his powers, but rescues Arsenal from an explosive Rocket Red suit, landing in Metropolis. He meets Lois, and asks for her help to thwart the virus. They start alone, but Lex Luthor discovers them, and wants to "help". After attempting to break into the Fortress of Solitude for better technology, they return to LexCorp, where Luthor double-crosses Superman. But they manage to escape, with the next step being the JLA Watchtower on the moon.
Reprints