This issue was one of the first ten publications banned in Queensland in 1954 by the newly created Queensland Literature Board of Review. For information, see http://blogs.slq.qld.gov.au/jol/2014/09/23/banned-comics-love-illustrated. 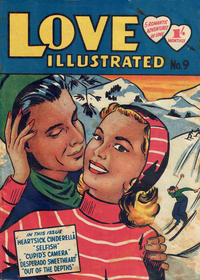 Genre
romance
Characters
Jane Smith; Hal Marden; Sam Smith; Mrs Smith; Doris Evans;
Synopsis
Violin play Sam Smith loses two fingers in a film studio accident and bans everything related to movies in his house. His daughter Jane is discovered by producer Hal Marden, who makes her a star. The two fall in love, but the conflict of hiding her other life from her father gets too much for Jane and she quits. But Hal tracks her down.
Reprints

Genre
romance
Characters
Dr Bill Clark; Yvonne Taylor; Roy; Polly Adams
Synopsis
After Dr Bill Clark professes his love for Yvonne, intern Roy makes a play for her. She likes his attention and dates him whenever Bill is working. But Roy loses his job when he skips doing an important blood test to go out with Yvonne. Bill decides Yvonne is as immature as Roy and accepts a new job in Guatemala. Yvonne discovers he still loves her and follows.
Reprints

Genre
romance
Characters
Janie Clark; Jock Lawrence; Andy Benton
Synopsis
Jock tells Janie that she's had to wait a year for him because he's been on secret overseas service for the USA. She gets a job with Andy in a photography shop to save money for her marriage to Jock. Andy tells her that Jock has been in prison and that there is photographic proof of a new crime. As Jock and Andy accuse each other of the robbery, Janie uncovers the truth just in time.
Reprints

Genre
romance
Characters
Bull Henley; Mr. Roane; Pinto Jim Baker; Sally Roane
Synopsis
Sally's father tells her to be careful as killer Pinto Jim Baker has come back to Sage Gap. When Sally's horse is hurt, Jim comes to her aid. They talks, and Sally discovers that Jim had been cleared on self defence, but now suffered from a reputation as an outlaw. She sees him as a sensitive man and falls in love with him. But she can't hurt her father by telling him and decides to meet Jim one final time at dusk to say goodbye. When Jim is accused of a murder at the time of her meeting, she knows she must tell the truth and Bull Henley is exposed as the real killer.
Reprints

Out of the Depths (Table of Contents: 5)

Genre
romance
Characters
Jean Farrel; Jean's boss; Nick Chambers; McCoy; Sam Fox; Rowley; Linetti; David Rowley
Synopsis
Nick Chambers is convicted of throwing Carl Hummel into the concrete foundations of a new bridge. Successful Daily Globe gossip columnist Jean Farrel goes to the prison to write a human interest story on him, convinced that he doesn't look like a killer. She discovers his construction site was experiencing strange accidents and Hummel seems to be involved, trying to get Chambers to lose the construction contract. Following Chamber's arrest, the mysterious Atlas Engineering Company takes over the contract. And the head of that company turns out to be Chamber's defence attorney.
Reprints

The original story was nine pages. Page 3 of the original story has been removed from this reprint, with a caption from the middle of the page used as introductory narration on the next page. On the missing page, Jean talks to Pop who shares her feeling that Chambers might be innocent and secures access to speak to him.