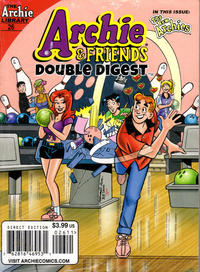 Archie & Friends
Genre
humor; teen
Characters
Archie Andrews; Dilton Doiley; Jughead Jones; Veronica Lodge; Reggie Mantle; Moose Mason; Mr. Lodge; Pop Tate; Cricket O'Dell
Synopsis
Due to an allergy to pine nuts, Cricket's nose for detecting money is altered. She now has the ability to predict how much money someone will have in the near future. To that end, she predicts Archie will have over $23,000 dollars and the Lodges will be penniless.
Reprints

The Dance Flaw! (Table of Contents: 3)

The Winner (Table of Contents: 4)

Reggie
Genre
teen
Characters
Archie Andrews; Veronica Lodge; Reggie Mantle
Synopsis
Reggie has recycled all his sports trophies into items to use around the house.
Reprints

Spoof of the Power-Puff Girls.

Credits from the reprint in Archie's Funhouse Double Digest (Archie, 2014 series) #13, no credits in this digest.

Illustration used as the title page for the next section featuring Explorers of the Unknown reprints.

Menace Of The Lost Valley (Table of Contents: 9)

The Big Mystery! (Table of Contents: 15)

The "Arnie" comic is a parody of Archie comics.

Genius of Love (Table of Contents: 17)

First Line of Dialogue or Text
Moose, coming over on Saturday?
Feature Logo

Archie and the Gang
Genre
teen
Characters
Archie Andrews; Chuck Clayton; Betty Cooper; Miss Grundy; Hot Dog; Jughead Jones; Midge Klump; Hiram Lodge; Veronica Lodge; Reggie Mantle; Moose Mason; Mr. Weatherbee; Nancy Woods
Synopsis
Each member of the cast is explained as if they were a doll and the accessories that would come with them.
Reprints

The Archies
Genre
teen
Characters
The Archies [Archie Andrews; Betty Cooper; Jughead Jones; Veronica Lodge; Reggie Mantle]
Synopsis
A concert promoter agrees to book The Archies, but only if they add some of his gimmicks to the act.
Reprints

Garden of Greed (Table of Contents: 23)

The Good, the Bad, and the Reggie (Table of Contents: 24)

What’s a Palindrome? (Table of Contents: 26)

Illustration used as the title page of the next section featuring New Archies reprints.

Diamond and Girls (Table of Contents: 32)

How many times can you find the name Moose in the puzzle.

Credits from the index of the original printing.

No credits in this issue.