First Line of Dialogue or Text
Archie!! You were supposed to watch my frogs for me!
Genre
humor; teen
Characters
Archie Andrews; Betty Cooper; Veronica Lodge 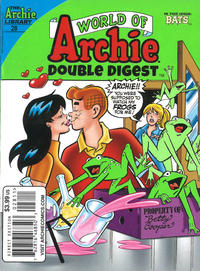 Dine and Dunce (Table of Contents: 4)

Voice of Doom (Table of Contents: 5)

The Beg Bag (Table of Contents: 6)

Originally, this story featured a cliffhanger that went unresolved due to the series cancellation. This cliffhanger has been replaced by a request for fans to let the editor know whether they want to see more Cosmo stories.

A Fair To Remember (Table of Contents: 15)

Genre
humor; teen
Characters
Archie Andrews; Veronica Lodge; Betty Cooper; Jughead Jones
Synopsis
Archie feels guilty that he went on a date behind Veronica's back. Little does he know that Veronica did the same.
Reprints

On page one, the word "gay" has been replaced by "grand".

The Fantasy Contest! (Table of Contents: 24)

Genre
humor; teen
Characters
Betty Cooper; Archie Andrews
Synopsis
Betty tries to decide which era to write about for a Teen Girl Magazine contest. As she mulls the eras over, she fantasizes about being with Archie in each era.
Reprints

First Line of Dialogue or Text
My husband says we'll take it!
Genre
humor; horror-suspense
Synopsis
Introduction to the Tales Calculated To Drive You Bats section. Features a cropped version of the cover to issue 1, with the text above "Bats" rewritten.
Reprints

The Monster Crisis (Table of Contents: 31)

First Line of Dialogue or Text
Did you get your new bulletin board...
Genre
humor; teen
Characters
Miss Beazly; Miss Grundy
Reprints