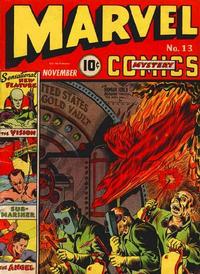 Genre
adventure
Characters
Captain McGraw; Warden Dawes; Danny the Dud (villain, death); Sam the Barber (villain)
Synopsis
As Danny the Dud is being transferred to "the big house", he thinks of his ex-partner whom he double-crossed and sent up the river. Now, as he sits in the barber's chair in prison, ready to get his first shave, the last thing he sees is that ex-partner with a razor in his hand!
Reprints

Found on the inside front and back covers.

[Terror in the Subway] (Table of Contents: 2)

Genre
superhero
Characters
The Human Torch [Jim Hammond]; un-named mayor; Captain Rawlins (policeman); Reiss (villain, introduction); Mr. Morton (villain, introduction, subway builder)
Synopsis
A subway builder loses both of his sons to cave-ins while constructing the tunnels, causing him to lose his mind and seek revenge, wanting to wreck trains so they wouldn't disturb his sons' graves within the tunnels' walls. But he is confined by those whom he hires to help him accomplish the task and the Torch must stop them.
Reprints

Genre
superhero
Characters
The Sub-Mariner [Prince Namor]; Dorma; Princess Fen; Toro (an Atlantean tailor, introduction); The Nazis (villains, some die)
Synopsis
Namor and Dorma, outfitted in new suits designed to ward off poison gasses, and on their way to Europe to aide in the war efforts, stop off at an island for rest. But they find themselves not only under arrest but under attack from the Nazis as well.
Reprints

Genre
superhero
Characters
The Vision [Aarkus] (introduction, origin) (see also issue #23); Dr. Enoch Mason (introduction); Shiela Mason (his daughter, introduction); Mose (Mason's butler); Markham (scientist); "Brains Borelli" (villain); Queenie (villain); Tony (villain, introduction); Bomber (villain, introduction)
Synopsis
A professor, believing that ghosts and spirits actually inhabit worlds and universes that co-exist with our universe, is set upon by "Brains" Borelli's men during an experiment to prove his theory. The result is a being called Aarkus, Destoyer of Evil, drawn to the laboratory, who helps save the professor and his daughter from harm.
Reprints

[Case of the Counterfeit Paintings] (Table of Contents: 5)

[Mystery of the Moon Robots] (Table of Contents: 6)

Genre
adventure
Characters
Electro; Professor Philo Zog; Dr. Simon Crane (introduction); Betty Crane (his daughter, introduction); Gnorr, Emperor of the Moon (villain, introduction, death)
Synopsis
The professor and the Cranes leave Earth for the Moon, but when they send out Electro to investigate the environment, he is attacked and captured by moon robots. Zog and the Cranes land and initiate their own attack on the moon people and save the day.
Reprints

[The Murder of Happy Norton] (Table of Contents: 7)

Genre
superhero
Characters
The Angel [Tom Halloway]; Happy Nolan (introduction, death); The Savoy Gang [Limpy Savoy (death); Rocco; Bumpy; Punchy; Harry] (villain. introduction for all)
Synopsis
The death of a former member of the Savoy mob who had chosen to go straight angers the Angel, and he swears to hunt down the men responsible for this death.
Reprints

[In the New York Jungle] (Table of Contents: 8)

Genre
jungle
Characters
Ka-Zar [David Rand]; Zar (a lion); Ruth Wilson; Dr. Wilson
Synopsis
Now in America, Ka-Zar is taken in by the police. He escapes through the efforts of the Wilsons and is put into their custody. But Ka-Zar feels he must free Zar as well from behind bars in the zoo, and so he makes his way there to free him.
Reprints