The Secret Invasion (Table of Contents) 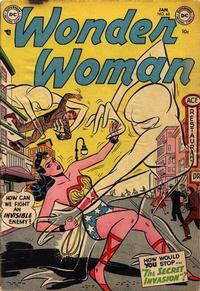 Genre
humor; advocacy; teen
Characters
Binky; Lucy
Synopsis
Binky and his sister Lucy have both planned parties for that evening, and democracy helps them devise a solution.

The Human Tank! (Table of Contents: 2)

Genre
superhero
Characters
Wonder Woman [Diana Prince]; Steve Trevor; Human Tank (Villain, Intro)
Synopsis
No weapon can harm him and no jail can hold him; how can Wonder Woman defeat the Human Tank?

The Secret Invasion! (Table of Contents: 7)

Genre
superhero
Characters
Wonder Woman; Duke Deception; Professor Dekon (illusion figure)
Synopsis
Wonder Woman wakes up in San Francisco-- or does she? A scientist projects images with his alien-granted abilities...or does he? It's all an elaborate ruse to frustrate Wonder Woman's defense against an alien invasion.
Reprints

The Duke of Deception calls himself "Duke Deception" here.

Although Professor Dekon (Duke Deception) tells Wonder Woman the invaders are Orlusians from the planet Orbis, they're actually the Duke's Martians.

Superman on Television! Is Super-TV (Table of Contents: 8) (Expand) /

Lucky in Love (Table of Contents: 12)

The Impostor Queen! (Table of Contents: 13)