Get Yer Free Big Ben Banger - Inside! (Table of Contents)

The figure of The Thing is taken from the splash page of Marvel Two-in-One (Marvel, 1974 series) #92.

(Thanks to eagle-eyed Jay Flash for spotting it.) 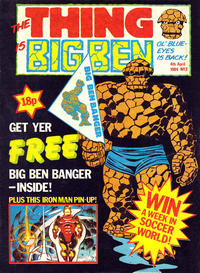 [Trouble with Woofers and Tweeters] (Table of Contents: 6)

A Mind Is a Terrible Thing to Waste! (Table of Contents: 7)

Genre
superhero
Characters
Captain America [Steve Rogers]; Team America [R. U. Reddy; Honcho; Wolf; Marauder]; Mad Thinker's Android
Synopsis
Cap is taking part in a charity motorcycle event with Team America when a giant monster appears and captures a Nobel prize winner who is in the audience. Cap and Team America follow the monster through a transporter tube and find themselves in a quaint little town inhabited by the world's greatest thinkers from the past.
Reprints

Doctor Who / promo (ad from the publisher) / 1 page (report information)