And Then There Were None! (Table of Contents) 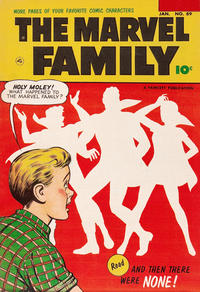 Characters
Ted Cotter; Bill Cotter (Ted's Uncle, death); Mayor Benson; Andy Parker (villain, Bill's guide)
Synopsis
Ted's uncle invites Ted to go along with him and his guide on a rather secretive two-day tracking mission. When Ted sees his uncle's Geiger counter, he realizes that the secret was probably that of a uranium find. And Andy Parker was interested in that find...for himself.
Keywords
Hunter's Lodge; Moosehill (Minnesota)

The Marvel Family Fights the Dark Curse (Table of Contents: 2)

Genre
superhero
Characters
Captain Marvel [Billy Batson]; Captain Marvel, Jr. [Freddy Freeman]; Mary Marvel [Mary Batson]; Sterling Morris; Professor Clifton Drake; Emil Shaw (Drake's aide)
Synopsis
Billy is making a live TV broadcast of the archaeological expedition of the ancient ruins of Voodah Reef, and sees the professor discover a strange urn with a curse on it protected by a large stone idol. When a series of mysterious accidents begin to occur, everyone thinks it is the curse in action. When the Marvel Family opens the urn they discover fake jewels inside, and discover that the professor's aide removed the real gems and replaced them with fake ones.
Keywords
Shazam; Voodah Reef; WHIZ-TV

The last appearance of Sterling Morris before Shazam! #1.

If the Shoe Fits! (Table of Contents: 6)

Genre
humor
Characters
Headline Harry; Harry's editor; robber (villain)
Synopsis
Harry is upset that he hasn't been able to find a good story for his editor, when he is held up. The robber only finds sixty cents on Harry, but Harry opens his big mouth about the $100 in his shoe!
Keywords
The Gazabo Gazette

The Marvel Family gives readers five different phrases carefully concealed in an illustration. The answers to the previous issue's puzzles are given as well.

A Whistle Stop! (Table of Contents: 8)

Genre
humor
Characters
Rubbernose Randolph; bank president
Synopsis
The bank is being evacuated by the president because he got a tip that a time bomb had been planted there, and Rubbernose, as the guard, must stay inside. The bank president does give Rubbernose a whistle and tells him to blow it if the bomb does go off.
Reprints

A Clean Cook (Table of Contents: 9)

Genre
humor
Characters
Daisy; Uncle John
Synopsis
Daisy invites her uncle to dinner for the first time and asks how he likes the soup. He says that it tastes peculiar, and she says that maybe it's the soap powder she put into it.
Reprints

Script and art credits suggested by the Who's Who.

Then There Were None, Chapter One: One by One (Table of Contents: 10)

Genre
superhero
Characters
The Marvel Family [Captain Marvel [Billy Batson]; Captain Marvel Jr [Freddy Freeman]; Mary Marvel [Mary Batson]]; Professor Edgewise; Mrs. Wagner; Red O'Reilly (roomer); Leroy Marks (roomer); Jim Bellows (roomer); Jim (Policeman); Mrs. Van Arch (mention only); group of burglars (villains); group of jewel theieves (villains)
Synopsis
Billy, Freddy and Mary encourage the good Professor to get along home, but he says that he is working on a new discovery and can't. When he fails to show in time for dinner, the tenants of Mrs. Wagner's rooming house go looking for him and all but Billy and Freddy disappear. Suddenly, everyone shows up...all victims of the Professor's new invention! When jewel thieves hit the Van Arch residence, all jewels are returned except a necklace that had been given to Mary to return to Mrs. Van Arch.
Reprints
Keywords
Memory Stimulator Spray; Shazam

Chapter Two: Then There Are None (Table of Contents: 11)

Genre
superhero
Characters
The Marvel Family [Captain Marvel [Billy Batson]; Captain Marvel Jr. [Freddy Freeman]; Mary Marvel [Mary Batson]]; Professor Edgewise; Red O'Reilly; Leroy Marks; Jim Bellows; Mrs. Wagner; Lem Blucher [aka the Master] (villain)
Synopsis
Confronting Mary, Billy and Freddy are threatened with death by her, but they capture her and place her in a mental hospital, from which she escapes. Billy and Freddy soon discover that everybody in the boarding house has been replaced with robots, and Freddy quickly joins that group. The robots capture Billy, gather up all the money of the tenants and deliver it to their master, who forces Edgewise to finish Billy's robot. Then he attaches memory transfer caps on each of his victims in order to control them, then plans to murder the real people and use their robots to make money for him.
Reprints