Editor correction from Sid Jacobson via Arthur Lortie on 2 November 2004. This was previously solely credited to Leon Harvey, who appears as the editor in the indicia. However, Sid Jacobson did the actual editing on the book, not Leon Harvey.

First Line of Dialogue or Text
Real adventures that jump out of the page!
Genre
war
Reprints 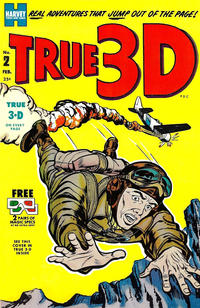 First Line of Dialogue or Text
How to use your magic 3-D specs" / "Dear Reader:

Inside front cover. Instructions for using the 3-D specs and an introduction by the editors.

Believe It or Not! / promo (ad from the publisher) / 1 page (report information)

Two-page spread of the Pearl Harbor bombing, with an excerpt of President Franklin Roosevelt's Day of Infamy" speech.

This 3-D story is unlike any other, as the first panel is regular 3-D, but the rest of the story is told from the perspective of each character. The reader would close is left eye to read the Red Head story and the right eye to read the Blue Boy's tale.

The Story Behind Harvey 3-D (Table of Contents: 13)

Inside back cover. The scientific principle behind the 3-D effect.