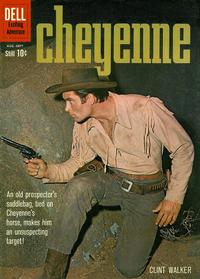 The Saddlebag (Table of Contents: 2)

The Drifter (Table of Contents: 3)

Genre
western-frontier
Characters
Matt Dobie; Joe Baker
Synopsis
In the badlands, a drifter meets up with a young man who had left home because he was bored and wanted to be on his own. The drifter subtly convinces the homesick youth to return to his parents' ranch.

The Peace Bride (Table of Contents: 4)

Genre
western-frontier
Characters
Small Bear; Long Lance
Synopsis
Small Bear escorts a girl to a rival camp for a wedding that will end the conflict between two bands of Cheyenne.

The Crooked Wheel (Table of Contents: 5)

Genre
western-frontier
Characters
Cheyenne Bodie
Synopsis
Cheyenne takes an undercover job as a bouncer in a casino to try to get evidence that the games are rigged.

Most Popular Prizes For You (Table of Contents: 7) (Expand) /