The Making of a Nurse! (Table of Contents) 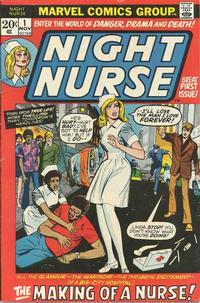 The Making of a Nurse! (Table of Contents: 1)

This appears to be a different Linda Carter then the one featured in Linda Carter, Student Nurse (Marvel, 1961 series). The 1961 Linda Carter did not have Georgia Jenkins and Christine Palmer as roommates, and there are no similarities between the characters besides nursing.

The Cat / promo (ad from the publisher) / 1 page (report information)