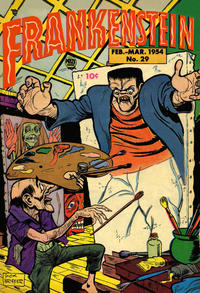 Genre
horror-suspense
Characters
Frankenstein; Mrs. Borgo; Dr. Costia
Synopsis
Frankenstein falls in love with a beautiful widow, Mrs. Borgo. When her young son contracts appendicitis, Frankenstein abducts the woman but allows the local doctor to take the boy to the hospital. The monster keeps the woman a prisoner; she pretends to be ill so Frankenstein will bring the doctor to her. Mrs. Borgo and the doctor escape, but the monster causes their car to crash. However, he has a change of heart and takes them to the hospital, then departs.
Reprints

Genre
crime; science fiction
Characters
Jim Lees
Synopsis
Convict Jim learns a secret formula from his cellmate, a scientist. When released, Jim compounds the formula and bathes it it: it makes him invulnerable. He commits numerous robberies and is impervious to bullets, until a shot ricochets into his ear--which he had not coated with the formula--killing him.
Reprints

This is obviously a twist on the Achilles story, but it is also reminiscent of "Hoichi the Earless," an episode in the film "Kwaidan" (1964), based on the 1904 book "Kwaidan: Stories and Studies of Strange Things" by Lafcadio Hearn.

Genre
horror-suspense
Characters
Kenneth Bradley; Inspector David Harper
Synopsis
After 20 years in prison, Bradley decides to avenge himself on the man who arrested him, Inspector Harper. Bradley shoots Harper and tries to dump his corpse in the nearby mud flats, but Harper's arms are locked around his body and cannot be dislodged. Unable to free himself, Bradley drowns when the tide comes in.
Reprints

Death in Reflection (Table of Contents: 6)

Genre
fantasy-supernatural
Characters
Floyd Ellis; Fantine
Synopsis
Writer Ellis visits an abandoned chapel and discovers a portrait of a man who looks just like him, but who died in 1853. However, the crypt is empty. Ellis sees a woman in the mirror: it's Fantine, who jealously stabs him to death. Ellis falls into the empty coffin.
Reprints