Interior front cover and back covers are all color ads. Index information from Neil Hansen.

Alterations on Mimic (wings and hands) by Marie Severin. 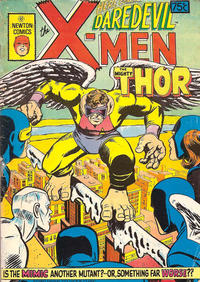 Lo! Now Shall Appear-- The Mimic (Table of Contents: 1)

Genre
superhero
Characters
X-Men [Professor X; Cyclops [Scott Summers]; Marvel Girl [Jean Grey]; Angel [Warren Worthington III]; Beast [Hank McCoy]; Iceman [Bobby Drake]]; Zelda; Vera (first appearance); Mimic [Calvin Rankin] (first appearance, origin, villain)
Synopsis
Bobby and Hank tussle with mysterious Calvin Rankin, who beats them by mimicking their powers. Calvin then has an encounter with Jean at a restaurant. Realizing he is dealing with the X-Men, Calvin follows Jean home and asks to join them. Once he has absorbed all of their powers, he battles them and captures Jean. The team follows him to his hideout deep in an old mine. Mimic uses his powers to uncover a machine his father built that will allow him to keep the combined powers for good. Xavier allows Mimic to use the machine which doesn't give him powers but strips his mimic powers away.
Reprints

This story reveals how Professor X lost his legs.

This is the only appearance of Ox II as he dies in the story.

There Shall Come a Gladiator! (Table of Contents: 4)

Genre
superhero
Characters
Daredevil; Foggy Nelson; Karen Page; Gladiator [Melvin Potter]
Synopsis
A burly costume store owner decides it is really the clothes that make the man and begins his career as the Gladiator. Foggy gets a Daredevil costume from Melvin who talks the tubby lawyer into setting up a staged super fight to impress Karen. Thinking his fight with Foggy will draw out the real DD, Gladiator goes after him for real and Matt has to take a hand in rescuing his friend. In the night and the fog, everyone assumes it is Foggy as Daredevil that beat the Gladiator back.
Reprints

The Vengeance of the Thunder God (Table of Contents: 5)