This was the fourth volume published. It came after vol. eleven. Synopses by Michael Barrier from "Carl Barks and the Art of the Comic Book" (M. Lilien, 1982). 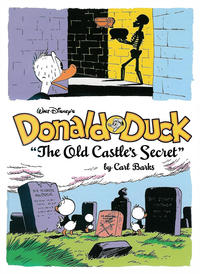 Genre
adventure; anthropomorphic-funny animals; humor
Characters
Donald Duck; Huey; Dewey; Louie; Uncle Scrooge (second appearance); Diamond Dick
Synopsis
Uncle Scrooge and the ducks go to Scotland to find the treasure hidden in the walls of the old McDuck castle, and there they encounter a "ghost" that is invisible except for the shadow cast by its skeleton. The "ghost" soon steals the treasure and traps the ducks on a balcony a hundred feet above the ground, but the nephews get down safely and find a secret entrance to the castle through an old graveyard.
Reprints

[Watching the Watchman] (Table of Contents: 7)

Genre
anthropomorphic-funny animals; humor
Characters
Donald Duck; Huey; Dewey; Louie; Watchman; Scarpuss; Two-Gun Wolf
Synopsis
Donald takes a job as a night watchman, guarding a million dollars in silk, but the nephews have to prevent him from falling asleep on the job.
Reprints

Genre
anthropomorphic-funny animals; humor
Characters
Donald Duck; Huey; Dewey; Louie; Sir Gnatbugg-Mothley; Professor Argus McFiendy; Fuzzy Wuzzy; Rough Savages
Synopsis
Donald, an aggressive butterfly collector, is hired by Sir Gnattbugg-Mothley to go to Africa and bring back an Almostus Extinctus, rarest of butterflies. In Africa, the ducks are sabotaged by Professor Angus McFiendly, who is also after the Almostus Extinctus, and Donald is forced to give him the butterfly when the nephews are captured by cannibals hired by McFiendly.
Reprints

[Donald of the Coast Guard] (Table of Contents: 15)

Titled "Donald of the Coast Patrol" in the table of contents.

Genre
anthropomorphic-funny animals; western-frontier; humor
Characters
Donald Duck; Huey; Dewey; Louie; Sheriff; Jed; Jim Diamond; Blacksnake McQuirt; Guard; Donald's Horse
Synopsis
Donald becomes a sheriff's deputy in Bullet Valley and is sent out to bring in a gang of rustlers. The rustlers are led by Blacksnake McQuirt, a tough gunman who poses as a legitimate rancher and uses a branding ray to change brands from as far as a mile away.
Reprints

Barks caricatures himself on a wanted poster on the last page of the story.

Genre
anthropomorphic-funny animals; humor
Characters
Donald Duck; Huey; Dewey; Louie
Synopsis
Donald pretends to be sick so that the nephews will have to cook.
Reprints

[The Genuine Article] (Table of Contents: 19)

Genre
anthropomorphic-funny animals; sports; humor
Characters
Gladstone Gander; Donald Duck; Huey; Dewey; Louie
Synopsis
When Donald forces the nephews to be his caddies, they trick him into believing he can hit a hole-in-one with every shot and this leads to a bet with Gladstone.
Reprints

Kreiner comments on "The Old Castle's Secret," "Links Hijinks" and "Foxy Relations." Wivel on "Wintertime Wager" and "Sheriff of Bullet Valley." Fischer on "Watching the Watchman" and "Pearls of Wisdom." Gardner on "Wired" and "Gladstone Returns." Stajano and Gori on "Going Ape." Parille on "Darkest Africa." Ault on "Spoil the Rod." Fiore on "Rocket Race to the Moon." Beccatini on "Donald of the Coast Guard / Coast Patrol." Priarone on the one-pagers.

Accompanied by a panel apiece from "The Old Castle's Secret," "Wintertime Wager," "Watching the Watchman," "Wired," "Going Ape," "Darkest Africa," "Spoil the Rod," "Rocket Race to the Moon," "Donald of the Coast Guard / Coast Patrol," "Gladstone Returns," "Pearls of Wisdom" and "Foxy Relations." Also included are the the cover reprints listed below.

Like in previous volumes the original publisher name is stripped from these cover reprints.

[on beach with Bolivar] (Table of Contents: 25)

[Donald floats out of bath on soap bubbles] (Table of Contents: 27)

Carl Barks: Life Among the Ducks (Table of Contents: 28)

Accompanied by a single photo.

Where Did These Duck Stories First Appear? (Table of Contents: 30)