Indexed from scanned copy at http://comicbookplus.com. 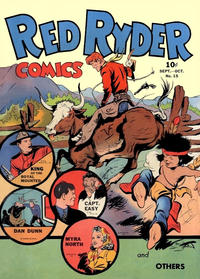 First Line of Dialogue or Text
Ha! They're up to something!
Genre
adventure
Reprints

First Line of Dialogue or Text
With the aid of Alley Oop, Aeneas has routed King Boogey...
Genre
humor
Reprints

From the story's final page:

"Picking up Red's fallen rifle, he rose to peek over the top of the big rock. Already, he saw, the bandits were halfway across at the one place where the river could be forded. Sighting quickly at the nearest rider, he squeezed the trigger.

"Three more times Red's big Winchester kicked against Little Beaver's shoulder. Two of the outlaws were down in the shallow water. Another had lost his hat."

This is the first of two text stories recorded in Du Bois's Account Books entitled "Little Beaver Picks His Shots," the second one recorded on the following page (88) of the MSU InterLibraryLoan printout. That story appears in Red Ryder Comics #29.

The Fighting Yanks in Tunisia (Table of Contents: 9)

First Line of Dialogue or Text
Pal Peyton and his squadron are transferred from the Near East Command to participate in the Tunisian Campaign to chase The Desert Fox, Rommel, out of Africa...
Genre
aviation; war
Characters
Captain Pal Peyton (leader of the Fighting Yanks); Buck Banning (a Fighting Yank); Peters (a Fighting Yank); Jenkins (a Fighting Yank); Major Weaver (C.O., U.S. Air base, Tunisian campaign); Corporal (U.S. Air base, Tunisian campaign); Big Kraut Sentry (of Nazi-occupied French colonial villa); Nazi officer; Junkers 52 pilot; Major (German); Major (U. S. Army tank destroyer outfit)
Synopsis
On Peyton's initiative, .377 MM cannons are installed in A-20s; machine guns removed. The cannons destroy tanks. Shot down over desert enemy territory, short on food and water days later, they find a French colonial villa in the Nazi hands. Overpowering the sentry, with elements of surprise and automatic weapons they capture the German outpost. Peyton captures a Junkers 52. An American tank destroyer outfit Major is suprised to find his objective already taken by the Air Force. Peyton requests a lift to an air field, so to be in on the final kill of the Afrika Korps.

The earlier account books burned in a house fire. The surviving account books pick up with payments received from June 1943 for stories submitted anywhere about 9 months before. The earliest payment for a Fighting Yanks story is on page 87, "Fighting Yanks. ?p. For Red Ryder Comics #17. Paid Sept 29, 1943." His estimates of which issue his stories appeared in, or even were intended for, are often wrong. Per Barrier's assumptions, we can presume he wrote earlier episodes of strips he was assigned to for which earliest surviving account books entries appear.

Editor Lebeck's earlier policy (again, per Barrier, page 31, quoting Frank Thomas) had been that (unless a writer was assigned to a strip, it is implicit, as Du Bois had been writing scripts for them since 1936 [Barrier, page 118]) the artist who drew a strip was to write it, as well. This policy was in place in 1940, but was being phased out by 1943 (with exceptions for the like of Carl Barks, or, in time, Walt Kelly, who illustrated Du Bois scripts, but also his own; and later, John Stanley, who soon left illustration to others; Mo Gollub found writing to be a distraction from the drawing board [Barrier, page 214]).

Barrier is silent in regards to Bob Jenney, but Jenney illustrated several aviation features (The Masked Flyer, The Flying Fortress, The New Flying Fortress), and likely wrote them, too. Fighting Yanks would be another such example. But the Du Bois account books indicate Du Bois took up the writing reins for that feature. Previously, Du Bois wrote and Jenney illustrated, under the mashup name Bob Gaylord, the aviation adventure strip THE SKY RANGER in THE FUNNIES (from September 1939) and SUPER COMICS (to May 1942), with Du Bois authorship of the strip in THE FUNNIES #37 through #47, inclusive, confirmed in copyright data.

This episode of Fighting Yanks, based on its style and content, was likely written by Jenney, but the appearance of German language dialogue and accents, both Du Bois markers, suggest a Du Bois participation in this script, a feature he was to be the sole writer of, until it was killed when the war ended. (His last Fighting Yanks script was sent April 23, 1945, appearing four months later in Red Ryder Comics #27, Sept-Oct, on sale August 17, 1945.)

• Herr Kapitan! You take us by surprise!

Myra North and the Secret Terror! (Table of Contents: 10)

First Line of Dialogue or Text
In the darkness, Kay walks up the alley...
Genre
crime
Reprints