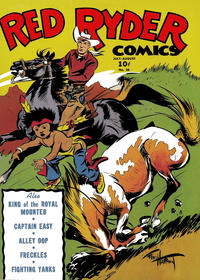 Inside front cover in red and black. Concludes on inside back cover. Title and writer credit per page 87, Gaylord Du Bois's Account Books, Sorted by Title, compiled by Randall W. Scott (MSU Libraries, 1985).

First Line of Dialogue or Text
King and Kid stop at the Indian village of Chief White Eagle and find that all the braves have been enslaved by a white man named Crane, who owns a mine.
Genre
adventure; western-frontier
Characters
Dave King (Sergeant of the Royal Mounted); Kid (King's companion); Gillis (storekeeper); ore train engineer; Indian; Boss Crane (mine boss); Crane henchman
Synopsis
King and Kid arrest Crane's ore train engineer for murdering an escaped Indian slave laborer, and Crane for slaving. Crane slugs King, and races the train back to bury the Indians in the mine. King sends Kid to wire for help. At the mine, King commandeers the train to charge Crane, but is switched to a submerged line. He defuses the dynamite. Now he must ensure Crane can't reset the charge as he leads the Indians out of the mine.
Reprints

First Line of Dialogue or Text
Sir, unless that armored car stops snooping around we'll miss the glider.
Genre
adventure; historical; military; war
Characters
Captain Easy; Sgt Max Hitler; Heintz; German soldier; Scotty (tail gunner); Major Chappell, M.D.; patient
Synopsis
Easy and Max are wounded making it back to the glider. The other glider is lost returning to England. The raid has failed because a soldier brought American cigarettes with him. The U. S. Medical Corps mends Easy.
Reprints

First Line of Dialogue or Text
I could see you tonight, tomorrow, Sunday afternoon, or possibly Monday!
Characters
Freckles McGoosey; Lard Smith; Hilda; barber; manicurist; Hector
Synopsis
On the phone, Hilda, who previously wouldn't give him a tumble, grants Lard four consecutive dates. Lard gets a haircut, with Bay Rum, and convinces Freckles to make a double date, so he and Hilda can ride in the rumble seat. When Lard goes in to pick up Hilda, he's chagrined to discover that, while he slimmed down, she's become fat.
Reprints

[Battle in the Philippines!] (Table of Contents: 7)

12 panels per page (this issue's page count falls to 36, from 52 last issue; the story's page count was reduced to 4, from 6 pages as written; but, one presumes, without panel loss, by changing the page panel count from 8 to 12).

The art bears a resemblance to another Du Bois war series, Adventures of Omar (in Omar Super-Book of Comics). Credited artists for that strip were Dan Gormley, and W. B. Smith.

Du Bois markers:
• Peoples of the world: non-white. The focus of the story is the contribution of the Filipino guerillas, who are personalized; their bravery and sacrifice for liberty.
• Language: Spanish, Japanese. Accents: Spanish. "Viva liberdad!" "Bueno!" "Abajo Nippon!" "Banzai! Banzai!" "Get inside, Capitan! Jose and I weel close the door!" "Vivan ... las Filipinas!" "Caramba! They weel burn us next!"

First Line of Dialogue or Text
Alley Oop, wearing the magic belt, having unconsciously wished himself back in Ancient Egypt, is set upon by a soldier.
Characters
Alley Oop; soldier of Egypt; crocodile
Synopsis
Having unwittingly wished himself back to Cleopatra's Egypt, Oop faces off a soldier of Egypt. Espying the Nile's breadth, he figures his armour would thwart swimming across. Seeing a bird fly across, he wishes he could fly, and finds himself in the air. Bemused, he tumbles into the water next to a crocodile on the shore!
Reprints

First Line of Dialogue or Text
'scare us off Pock-mark Pete's trail, and I don't mean maybe!'
Genre
adventure; western-frontier
Characters
Little Beaver (a Navaho youngster);Red Ryder; Pock-mark Pete
Synopsis
An ancient arrow knocks Red's hat off. Come dusk, Red scaled the stone tower while Little Beaver covered him from below. The Navaho youth let fly with four arrows at four figures, scoring each time, but none of the figures were affected by them. Red called down: Pock-mark Pete was trussed up. The figures were mummified ancient warriors of a bygone tribe.

Inside back cover. Continued from Inside front cover. Concludes.

First Line of Dialogue or Text
Boy! This is my night t'howl! I feel it comin' on!
Genre
humor
Characters
Fat; girl
Synopsis
Fat is grooving until the girl upsets his groove with news of Boots.
Reprints