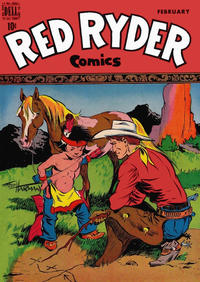 Inside front and back cover B&W

Zane Grey's King of the Royal Mounted (Table of Contents: 4)

Little Beaver Pulls a Fast One (Table of Contents: 5)

First Line of Dialogue or Text
A swift thudding of hoofs from farther up the slope halted Little Beaver and Po-ko in their tracks.
Genre
western-frontier
Characters
Little Beaver; Po-ko; Thunder (Red's horse); Papoose (Little Beaver's horse); Po-ko's horse; Red Ryder; Aunty Duchess; Aunty Duchess's blue roan; Rufe Haggley
Synopsis
Thunder is spooked. The kids find Red unconscious under a freshly felled tree. He comes to, thinking he chopped wrong. Little Beaver deduces he was slugged and the tree felled by the villain. Aunty Duchess arrives scolding Red for tying Thunder under a hornets' nest. Red sees Thunder's coming home riderless was to draw her from the house so it could be searched for the cash Purvis paid her. (It was Purvis's fired ranch-hand, Rufe.) LB pins Rufe's thumb to the barn with an arrow. Two more arrows do his chaps. Po-ko brings hammer and nails. Rufe is pinned. The kids go inside for jam.

First Line of Dialogue or Text
Ted! Do you think there'll be any gold claims left to stake when we get to Crowfoot Canyon?
Genre
western-frontier
Characters
Sandy Rivers; Ted Lucas; Billy Haynes; Andy Packer; Nipper (Andy's horse); Sandy's horse; tent city (shown); Silk Selden
Synopsis
Andy would shoot Nipper who broke a leg. Sandy sends him to the claims on her horse. She knows a hidden spring where they take Nipper, rig him a sling with two block and tackle and tarp. Sandy sets Nipper's leg, (she's watched her dad do it). She has a hay rack built and stocked. They return by a tent city, see Selden, find Andy who's staked a claim: there's no water for panning. Ted works on the lean-to. Billy susses water is underground, goes for pipe from his dad's store. Sandy goes with. They check on Nipper, return with the pipe. Billy shows how to drill. They pump water, strike color!

This is chock full of Du Bois identifier: 1) three engineering projects (building the sling from two sets of block and tackle and a tarpaulin; building the hay rack from dry branches; 2) drilling for water with sledgehammer, well point, and pipe); 3) an animal (Nipper); 4) animal having individual identity, speaking (Nipper's "Huh-huh-huh!"); 5) an act of mercy (the veterinary project to save Andy's horse and spare him a broken heart); 6) collaboration (Ted builds the lean-to at the claim; Sandy ministers to Nipper at the hidden spring, directing the entire enterprise---also a 7) feminist statement, another Du Bois identifier; and Billy sussing the location of water and how to get it); 8) friendship (to Andy); 9) providence (finding color).