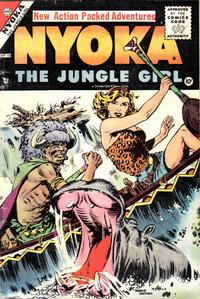 The Vanishing Warriors: War in the Jungles (Table of Contents: 1)

The Vanishing Warriors: Up a Tree (Table of Contents: 2)

The Vanishing Warriors: The Watery Graves (Table of Contents: 4)

Although reprinted from the Fawcett Nyoka #59, significant changes have been made to this story to appease the Comics Code Authority censors, both in text and illustrations. Two examples from page one suffice to make the point. In the Fawcett version the angry natives are saying, "Yes, we kill them and run off with treasure," which in the Charlton version becomes, "Yes! Then we run off with treasure!" Two panels later (Fawcett) the two natives leap out of the trees, slamming both Nyoka and her two male companions savagely to the ground, knocking them out so that the three can be carried limply off in the next scene. In the Charlton version, however, Nyoka has been converted into the guy, and one of the guys has been omitted from the panel, because apparently you could not do that much physical violence to the heroine. Nonetheless, Nyoka (who was not slammed to the ground, therefore) is still in an unconscious heap on the ground with the other two, and the story drives relentlessly on.

The Platypus (Table of Contents: 5)