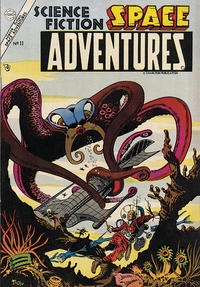 Genre
science fiction
Characters
Ron Adams; Halliday; Carol Halliday; Hugo Parsons; Hendricks
Synopsis
Ron Adams, Interplanetary "Bring 'Em Back Alive" Explorer, demands a half-million dollars to build a spaceship and go to the planet Xarto. There he hopes to capture a giant, carnivorous plant that is worth a great deal of money. Halliday gives Adams the money on the condition that the financier's daughter, Carol Halliday, be permitted to go along. Hugo Parsons goes with to keep Carol in line. When her independent nature finds her in the clutches of the plant-monster, it's up to Adams to save her.

You Are the Jury (Table of Contents: 2)

Genre
science fiction
Characters
Ogu
Synopsis
Ogu is an alien assigned a guard post in space. He notes a small planet, Earth in actuality, and goes there to investigate. He runs across a circus. The circus performers try to shark him in a poker game, but Ugo beats them at a "sky's the limit" hand and takes the sky with him. Realizing the people needed the oxygen to survive, he attempts to return the sky. He is arrested for abandoning his post and brought to trial before he can do so. He tries to convince his prosecutors to permit him to return the sky.
Reprints

Moment of Decision (Table of Contents: 3)

Machines versus Mars (Table of Contents: 4)

Genre
science fiction
Characters
Andor; Kyt
Synopsis
Airman Andor is a police officer in space. He goes to a disturbance call. An elderly man is angry at his maid for attempting to steal his treasure map. She is a young and attractive blonde woman named Kyt. As Andor is interviewing Kyt, the oldster uses his electric whip on her. Andor shoots and kills him, citing resisting arrest. He kisses Kyt. He quits the force, going to the asteroid Klaxon to find the treasure.
Reprints

Case of the Sweating Swami (Table of Contents: 6)

Legions of Atlantis (Table of Contents: 7)

Genre
science fiction
Characters
Captain Small; Huey; Robert Crane; Lor-Shim; Fen-Ac; Ssil-Il; Shar-La; Valyon
Synopsis
The Navy submarine R-93 dives. Something goes wrong and it goes too deep. Captain Small, Huey, and Robert Crane are rescued by fishmen from the city of Atlantis. The fishmen are Lor-Shim, Ssil-Il, and Fen-Ac. Shar-La is queen of the domed city of Atlantis. She explains to Robert that the Atlanteans are faced with extinction due to the cooling of the ocean. The crew help the Atlantians with their non-functioning technology by hooking up the nuclear submarine's atomic engines. They get the city running again. Shar-La plans to marry Crane, but Elder Valyon starts a revolt against the pairing.