First Line of Dialogue or Text
You had no right to read my diary...
Genre
romance 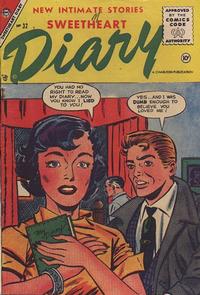 Night of Sorrow (Table of Contents: 1)

This story is part of the unpublished inventory purchased from Fawcett. It shows some evidence of having been edited (albeit in somewhat haphazard fashion) to make it conform to Comics Code guidelines. On page three two women appear for three panels in bathing suits. One, who is drawn from the back in the first panel is clearly wearing a two-piece suit, but in the subsequent panels this is converted to a black garment that's apparently supposed to be a shirt and shorts affair.

Customs of Courtship (Table of Contents: 3)

I was Jealous (Table of Contents: 4)

My Anguished Heart (Table of Contents: 5)