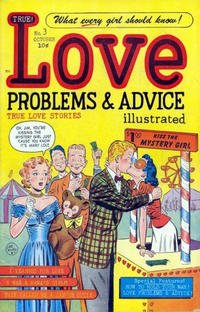 I Yearned For Love! (Table of Contents: 3)

Genre
romance
Characters
Laura Manvell; Rod Williams; Johnny
Synopsis
Unattractive college student Laura goes home on vacation. When telephone installer Rod arrives, she’s wearing a beautiful life-like mask and he asks her for a date. That night, she poses as the maid (sans mask) when he arrives: he’s attracted to her, but she thinks it’s just because he isn’t wearing his glasses. However, Rod says he loves her and that makes her beautiful in his eyes. Laura is doubtful but eventually realises he’s sincere.

Looks so unlike Lee Elias work while it does, that it makes me wonder if he inked it (freely) over someone else.

Have I the Right To Love? (Table of Contents: 4)

Genre
romance
Characters
Sally; Jim
Synopsis
Sally goes to work in an office at age 16 to support her widowed mother and younger siblings. Later, when Jim proposes marriage, she hesitates because he’s unaware of her family obligations.

This story seems to be somewhat tied in to the advice column "Dear Peggy" which follows, although the "famous authority" who gives advice in the last panel is not identified. Readers are urged to send in their problems and each issue one will be illustrated in a comic story.

My Own True Love (Table of Contents: 6)

They Called Me a Campus Cutie (Table of Contents: 8)

Genre
romance
Characters
Ann Couglin; Mrs. Couglin; Don; Scott Lucas
Synopsis
College student Ann goes to work as a model for slick ad photographer Scott, and thinks she’s fallen in love with him. Ann gives her former boyfriend Don the brushoff, then discovers Scott is a womanizing liar. She hopes “someday Don will forgive me and return to me!”

Could be the same artist as the first story, but without Elias inking