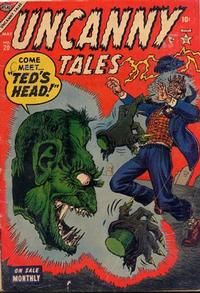 The Uninvited Guest (Table of Contents: 2)

The Only One (Table of Contents: 3)

Job Number
E-217
Genre
drama; war
Synopsis
The only captured prisoner the communists can convince to return to North Korea is a madman.

Who Shall Judge (Table of Contents: 4)

Job Number
E-128
Genre
drama; crime
Synopsis
A judge commits suicide when his crooked ways catch up to him.

Job Number
E-249
Genre
science fiction
Synopsis
A man discovers that the moon is being drawn towards Earth two miles every day by the force exerted on it from counter-Earth on the opposite side of the sun.

Plot similarities to Journey to the Far Side of the Sun (Universal Pictures, 1969): a space pilot visits a planet that is nearly identical to Earth and lies in Earth's orbit 180° away, behind the sun (note by Tom Lammers).

Job Number
E-165
Genre
horror-suspense
Synopsis
A scholar has a recurring dream of the executions which occurred during the French Revolution. He stops the guillotine by flashing a talisman at the executioner. When an acquaintance wants to take credit for the man's research he tries to accelerate the man's mental breakdown by substituting his talisman for a fake. The next time the scholar wakes from his dream he tells his daughter that the executioner just laughed at him when he flashed the talisman and went on with the executions. Outside his bedroom, the severed head of the schemer lies next to its body.