The Mask of Zorro (Table of Contents) 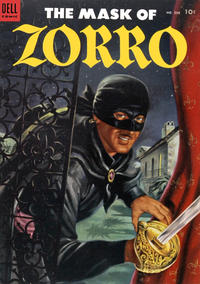 Inside front cover, in black and white, with two illustrations and typeset text.

The Mask of Zorro (Table of Contents: 2)

Oddity: the foreign trappers and traders are obviously Russians, but are never referred to as such, being called "strangers" and "foreigners," instead. It appears that the references to Russians were changed after the issue was lettered. However, names such as "Vasilenko" and "Radov" were not changed.