Cover is a cropped photo with line drawings in the background. 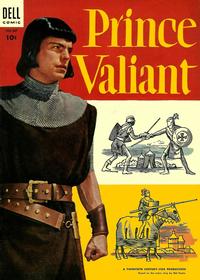 Inside front cover; black and white. Five photos from the movie with typeset text.

Story continues on the inside back cover in black and white and concludes on the back cover in color. Script, pencils, and inks credits for this sequence from Alberto Becattini (May 14, 2007). Adapted from the 1954 movie "Prince Valiant," which was based on the "Prince Valiant" newspaper strip by Hal Foster. A sequel to this story is in Prince Valiant Four Color #650 (September 1955).