The Hand of Zorro (Table of Contents) 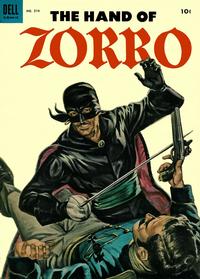 Flags of California (Table of Contents: 1)

California was explored and colonized by Franciscan monks and Spanish soldiers. Each military expedition flew a different flag, usually the personal banner of the nobelman commanding the expedition. Five such flags are illustrated and discussed in detail.

The Hand of Zorro (Table of Contents: 2)

Zorro wears a red mask in the story.

Page 33 appears on the inside back cover and is printed in black and white, while the final page is found on the back cover in color.