The Marshal's Gamble (Table of Contents) 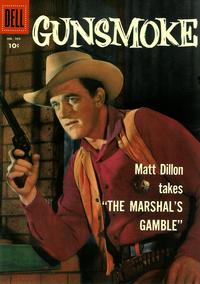 The Marshal's Gamble (Table of Contents: 2)

Genre
western-frontier
Characters
Matt Dillon; Chester; Kitty
Synopsis
Matt Dillon catches gambler Dodd using a marked deck in a card game. Later Dodd is robbed of the casino's receipts by masked men who he identifies as members of the Bar W, the same outfit he was cheating with the marked cards. Dillon brings two Bar W men to jail, but isn't sure if Dodd is lying to him to get revenge on the Bar W men.
Reprints

"The Gunsmoke artist is Jim McLaughlin (long faces, narrow jaw, etc.). He worked at Ace before they folded..." from Jim Vadeboncoeur, Jr. Hames Ware says McLaughlin ID in the Who's Who of American Comic Books originally came from Lou Cameron.
Art ID by Steinar Ådland December 2010

Story continues on inside back cover in black and white and concludes on back cover in color. The last panel is Dell's "A Pledge to Parents.