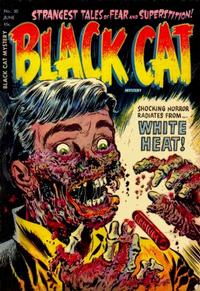 The King Is Dead (Table of Contents: 1)

Genre
humor
Synopsis
Moe Gambo is the best hunter around, until he meets an exotic woman named Ava Riley who wants him for herself, and will stop at nothing to have him!
Reprints

Genre
horror-suspense
Synopsis
Walter Thorne needs money to help pay for his dying wife's operation and steals some uranium from the Nuclear Power Plant that he works at for some shady characters. After receiving payment of $10,000, he plans to pay for his wife's operation but she can't be saved because the doctor needed that special uranium to perform the operation!
Reprints

Genre
horror-suspense
Synopsis
An eccentric and very tall stranger named H. Jonathan Aloysius Cruikshank comes to town and charms the local folk. It turns out he's really a normal man in disguise that wants to get revenge on the local banker, sheriff, and general store owner for wronging him in the past.
Reprints