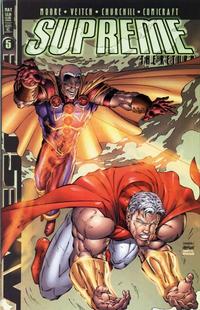 Alan Moore's script for this issue was completed before the cancellation of the original Awesome Supreme title and was originally intended for Supreme #61.

The Multi-Colored Menace of Master Meteor! (Table of Contents: 2)

This sequence comes between pages 8 and 9 of the previous story. Master Meteor's costume in this story is colored inconsistantly with the rest of the issue, but only in this segment are the jewels on his chest the colors he refers to them as.
Both Alan Moore and Rick Veitch's portions of this story were completed before the cancellation of the original Awesome Supreme title and were originally intended for Supreme #61.

Send It to the Citadel / letters page / 2 pages (report information)

First Line of Dialogue or Text
Dear Suprematons, I have recently read Supreme...

Letters of comment from readers Tom Fish, Fabrice Vigne, Chris Milnar, Patrick M. Gerard, and Albert Asker.
The column ends halfway through a column and a letter by a reader whose name was dropped off.

Century Preview [Who Controls the Past] (Table of Contents: 4) (Expand) /