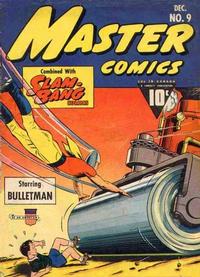 [The Hijacked Bomber] (Table of Contents: 2)

Script and art credits by Michael D. Fraley per interviews with Sven Elven's widow and son-in-law and documents they provided. See article in Alter Ego #162 (January 2020).

[Captured by the Djungas] (Table of Contents: 4)

Ghost of the Bad Lands (Table of Contents: 5)

[The Drought of Doom] (Table of Contents: 6)

[Framed for Kidnapping] (Table of Contents: 7)

[Mark of the White Arrow] (Table of Contents: 8)

Battefield is credited on pencils and ink in the Devil's Dagger story in Master Comcs #8, and that art is similar to this story. The faces of the villains are exact matches, long chin, small eyes and long noses. Also notice the face in sideview in the Battefield scan on Jerry Bails' Who's Who from Target comics with pencils by Battefield, and from the same period.

[The Horned Masks] (Table of Contents: 9)