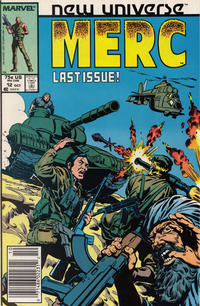 Continued from Merc Annual #1; No Mark Hazzard as he died in the Annual.