This issue is labeled as a Sightings tie-in to Final Crisis and is Green Shield Continuity #1.
This issue is a variant of Superman: New Krypton Special (DC, 2008 series) #1. 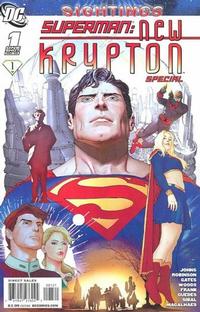 If You Want to do Great Things in Your World, Spend Some Time in Ours (Table of Contents: 5)

Advertising card insert for recruitment for the U.S. Navy.