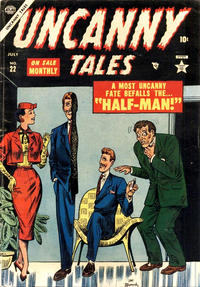 The Unctuous Undertaker (Table of Contents: 1)

Smaller Than an Atom (Table of Contents: 2)

Job Number
E-469
Genre
science fiction
Synopsis
Androids are subject to discrimination until a war with space aliens breaks out and then they gain some measure of equality. One of them even plans to marry a human girl if he survives the conflict, but when the war is won, the androids find the old barriers have been put back in place. When the android sees his intended sweetheart on the street, she pretends not to know him.
Reprints

The Locked House! (Table of Contents: 4)

Job Number
E-581
Genre
science fiction
Synopsis
A couple finds themselves to be the only survivors of an alien attack.

Job Number
E-599
Genre
horror-suspense
Synopsis
A thug hatches a plan to dognap a wealthy man's seeing eye dog for ransom, but it turns out that the man can see and the dog is actually a blind retired werewolf.
Reprints

The Horror of Sleepy Hollow! (Table of Contents: 6)

Job Number
E-523
Genre
horror-suspense
Synopsis
A man tries to get rid of his rival by frightening him as the headless horseman, but the other guy has the same idea and succeeds in getting his rival committed to an asylum. The real headless horseman shows up to punish him.
Reprints

Features the headless horseman and locale from “The Legend of Sleepy Hollow” by Washington Irving (1820) (note by Tom Lammers).