["Could the Sub-Mariner hold off the Nazi hordes till help arrived?" [sic]] (Table of Contents)

The cover also depicts the cover to The Human Torch #2 (#1). 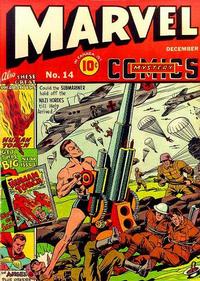 [Blitzing the U-Boat Base] (Table of Contents: 3)

Genre
superhero
Characters
The Sub-Mariner [Prince Namor]; Dorma; un-named Nazi lieutenant (villain); the Nazis (villains)
Synopsis
After Namor successfully routs invading Nazi paratroopers on an island Dorma and he arrived on for a rest, his questioning of the Nazi lieutenant reveals that the Axis Powers have built a secret submarine base on a little-known island 20 miles from the coast of Florida. He and Dorma for that base to tackle the Nazi horde.
Reprints

[The Synthetic Diamonds] (Table of Contents: 4)

Genre
superhero
Characters
The Angel [Tom Halloway]; Professor Hanley (villain, introduction); Hanson (villain)
Synopsis
The Angel investigates a mine operator that has a lot of equipment for handling radium on his hands, equipment that is being used to create synthetic diamonds.
Reprints

[The Werewolf Strikes] (Table of Contents: 6)

[The Kidnapping of Diana Dunn] (Table of Contents: 7)

[Attack of the Subterraneans] (Table of Contents: 8)

Genre
adventure
Characters
Electro; Professor Philo Zog; The Onees (villains, introduction for all, all die); King of the Onees (villain, introduction, death)
Synopsis
The destruction of the Fairbanks Iron Works leads Electro into the bowels of the earth to confront the Onees, who take control of the robot and force Professor Zog to come to his rescue.
Reprints

Genre
jungle
Characters
Ka-Zar [David Rand]; Zar (a lion); Ruth Wilson; Dr. Wilson; the Nazis (villains)
Synopsis
Ka-Zar succeeds in getting Zar out of the zoo he is imprisoned in and hides out on a British boat heading toward Africa. Unfortunately, the boat is torpedoed by an enemy submarine.
Reprints